Meets the last Monday of each month. New members are always welcome! Meeting both in person and via Zoom. 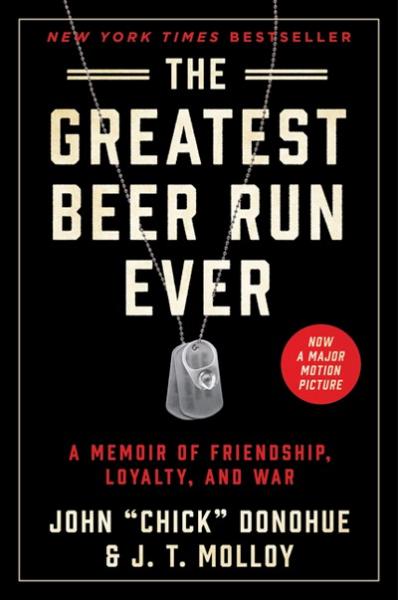 The Greatest Beer Run Ever : A Memoir of Friendship, Loyalty, and War by John "Chick" Donohue, J. T. Molloy

One night in 1967, twenty-six-year-old John Donohue—known as Chick—was out with friends, drinking in a New York City bar. The friends gathered there had lost loved ones in Vietnam. Now they watched as anti-war protesters turned on the troops themselves.

One neighborhood patriot came up with an inspired—some would call it insane—idea. Someone should sneak into Vietnam, track down their buddies there, give them messages of support from back home, and share a few laughs over a can of beer.

It would be the Greatest Beer Run Ever.

But who’d be crazy enough to do it?

One man was up for the challenge—a U.S. Marine Corps veteran turned merchant mariner who wasn’t about to desert his buddies on the front lines when they needed him.

A day later, he was on a cargo ship headed to Vietnam, armed with Irish luck and a backpack full of alcohol. Landing in Qui Nho’n, Chick set off on an adventure that would change his life forever—an odyssey that took him through a series of hilarious escapades and harrowing close calls, including the Tet Offensive. But none of that mattered if he could bring some cheer to his pals and show them how much the folks back home appreciated them.

This is the story of that epic beer run, told in Chick’s own words and those of the men he visited in Vietnam.

March - The Eagles of Heart Mountain by Bradford Person Simon

April - The Spy and the Traitor by Ben Macintyre

May - Elephant Company by Vicki Croke

June - Rocket Men: The Daring Odyssey of Apollo 8 and the Astronauts Who Made Man's First Journey to the Moon by Robert Kurson

July - The Alchemy of Air by Thomas Hager

August - 1968: The Year that Rocked the World by Mark Kurlansky

September - Bellevue: Three Centuries of Medicine and Mayhem at America's Most Storied Hospital by David Oshinsky

The Greatest Beer Run Ever: A Memoir of Friendship, Loyalty, and War (Paperback)